State-Based Control: The Next Step in Industrial Automation

The 1960s animated sitcom character George Jetson had an essential job at Spacely Space Sprockets, Inc. His job was to ‘push the button.’ The automation system did the rest. While we aren’t in the George Jetson era, we are fast approaching the age of autonomous automation – the self-driving car. Today’s cars are commonly equipped with sensors and automation for proximity alerts, backup, automatic braking, lane drift control and of course, the long-used cruise control. Such automation aides in operation and greatly improves safety.

What does this all mean for industrial automation? To embrace the future, we must evaluate and invest in various automation approaches that initially seem costly and challenging but eventually pay back handsomely as an investment in reducing long-term cost of ownership.

To improve margins and mitigate risk, industry is looking more and more to state-based control, which is literally and figuratively the next step in industrial automation. Literally in that it uses steps or states to control processes. Figuratively, in that while state-based control isn’t a new approach, industry is increasingly interested in how it can improve facility operations. So much so that the International Society of Automation (ISA) has gotten firmly behind the state-based control concept and is in the process of developing ISA-106, procedural-based control standards to support it.

Many facilities use step-by-step procedures and manual operations to move through these states. With today’s smart technologies, these procedures can be automated to a significant degree. This is where state-based control comes in. Instead of operators having to make decisions on each and every step and change in the procedure, state-based operations can reduce the operator’s needed interactions to a few key points, like making the step transition to start. The automated system can do much of the rest, such as lining up equipment to relieve operators from a multitude of tasks and allow them to focus on key decision points and monitor events more effectively.

The Cost to Automate 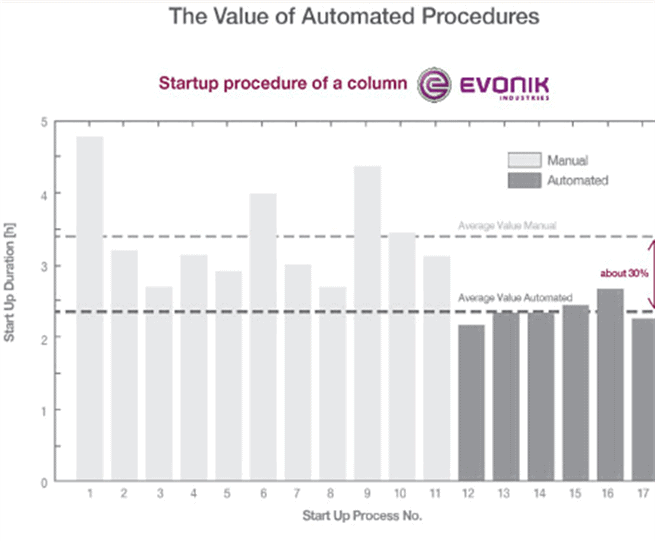 Each time Evonik restarted the unit, operators charted the time necessary to reach stable production, which ranges from 2.5 to 5 hours. Once the procedure was automated, quick and consistent startups became routine.
Source: InTech magazine (June 2015)

Oftentimes, we look at the cost of automating and must consider how to mitigate such costs. But we also must consider the cost of not automating the procedure. Optimizing a facility for the Run State makes sense in terms of time, but it doesn’t make sense in terms of risk, since 70% of all incidents occur during startup or shutdown. Operating errors account for greater than $80 million in costs, as well as 42% of unscheduled shutdowns.

Not automating can also cost you in terms of startup time. A typical state-based project will improve startup time by more than 30% for various units. The figure represents a migration to state-based control for a set of columns.

A facility that takes 8 days to get up to capacity and on specification may take only 36 hours using state-based control. From this data, we can realize the losses due to not automating the procedure and compare it to the cost of automating the procedure using state-based control. While in the short term the cost favors not automating, in the long term, it favors automating. So, ask yourself, can you afford not to automate your procedures? The answer depends on how long you plan on owning it.

On a personal note, I’ve been utilizing state-based control since the mid-1980s. It is typical for projects migrating from loop controls along with operating procedures to state-based control to be looked at with a big question mark. I was a skeptic at first. Afterall, the facility we were modifying ran fine and operated in the run condition 90% of the time. I was quickly converted after the first startup and wanted to know how soon the rest would be done. It is typical to be skeptical of such change, but one look at the ease and orderliness of startup is often the convincer for the skeptic.

As we move closer to George Jetson’s world of autonomous automation and the self-driving car, industry will move toward approaches like state-based control to improve operational effectiveness and efficiency, as well as reduce cost. To that end, we need to explore topics that help us gain a fuller understanding of what it means to integrate state-based control into a processing facility. Those topics would include:

Nolan, Tim (2016). “State-Based Control and the Value Delivered from the Initial Design through the Operating Life of the Facility” Paper presented at the AIChE Conference, Houston, Texas.