Five chemical units were utilizing Honeywell TDC 2000/PMX, a 1980s-vintage legacy control system. Because this system was soon to be no longer supported by the vendor, the owner was faced with a massive project to upgrade the systems to Honeywell Experion PKSTM. The owner chose MAVERICK Technologies as its migration partner for this successful, multi-year project.

The customer’s plants were operated with a DCS soon to be no longer supported by the vendor. Without sufficient internal resources to handle a migration project of this magnitude, management decided to partner with MAVERICK to staff the project and develop efficient migration tools in order to complete the DCS migration in a timely manner with minimal impact on production.

The five-year project was completed on schedule and under budget. The customer was extremely satisfied with MAVERICK’s dedication to the project, quality of work, and professionalism. MAVERICK provided over 40 engineer-years of service for the project with zero safety incidents. The customer has since continued to utilize MAVERICK engineers for various other DCS migrations, new DCS implementations, and advanced process control (APC) support.

The customer’s post-project evaluation noted that MAVERICK provided unequaled value by taking total ownership of the entire controls migration from conception to final hot cut-over, with zero process interruptions and zero safety incidents, and well under the project budget for contractor migration assistance.

John Hopshire, PMP, is currently the oil & gas Global Program Manager for Rockwell Automation and MAVERICK Technologies. In his role, John sets the strategic direction while working with all oil and gas industry customers. He has worked in the oil and gas, chemicals and engineering services industries for more than 25 years. 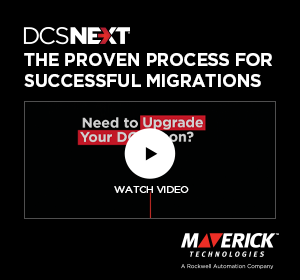